This will be the first of a series of development update posts regarding MyBB 2.0.  Currently in pre-alpha, MyBB 2.0 is the long awaited upcoming major version of the open source MyBB forum software.  We’ll be posting regular updates (we promise!) in regards to the development to keep you all updated.

Being a pre-alpha, many basic functions of forum software are not yet implemented.  Right now, all development is being done in private by a subset of the development team led by Euan T.  Once we have a working software with all the basics, the alpha release will be announced and we will open up the GitHub repo and the community at large will be able to begin contributing.  Once the majority of features have been implemented a beta will be released, and after that, a gold 2.0 will be let loose!

Currently no public timeframe is on the table.  We have an internal roadmap, but we’d rather not disappoint the public if we fail to make one of our milestones.  As always it will be released when it’s ready.  That being said, from the dev blog posts you should be able to make educated guesses.

Here’s the juicy content you’ve all been waiting for.  MyBB 2.0 is being coded in PHP, using the Laravel 5 framework and the Twig templating engine.  Various screenshots of 2.0 prototypes have been posted to MyBB’s Facebook and Twitter social media pages, revealing a long anticipated and rumored responsive theme.  “Pretty” URLs are available out of the box, taking the form “/topic/me-thread.1”, along with several other useful tools aimed at enhancing the search engine optimisation of the software such as relevant meta tags and canonical links. In addition, the new default theme makes use of semantic HTML5 elements, rather than the old and now defunct table-based layout that’s been a part of MyBB since the early days.

Here’s some screenshots of a super-secret development copy live on the Internet somewhere (don’t bother looking for it; it’s protected by HTTP auth and a rather obscure URL).

Everyone’s favorite features, /me and /slap, are live in the very first 2.0 “/me topic”.  By the way – we’ve transitioned from the old, usenet email group term of “thread” and changed the language to say “topic”, a much more modern and relevant term. 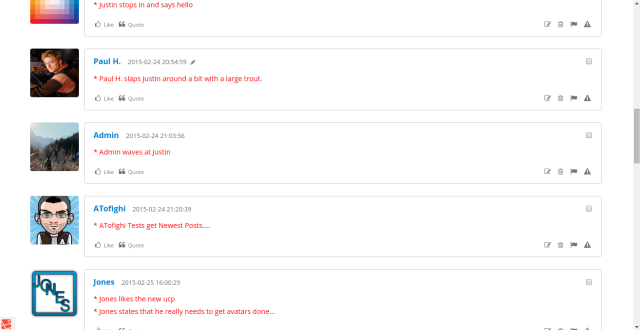 Buttons, as you can see, are provided in SVG format by fontawesome.  Another thing you may notice is the timestamps seem to be rather archaic; have no fear, relative time and more human readable dates are on the way.

This is by no means all that has been implemented so far, but as we plan on having regular dev posts we’ll save some for a later date!

We as a team are very excited by the prospects of MyBB 2.0 and are looking forward to a very exciting future. We hope that you too can share in this excitement with us and keep making MyBB great.